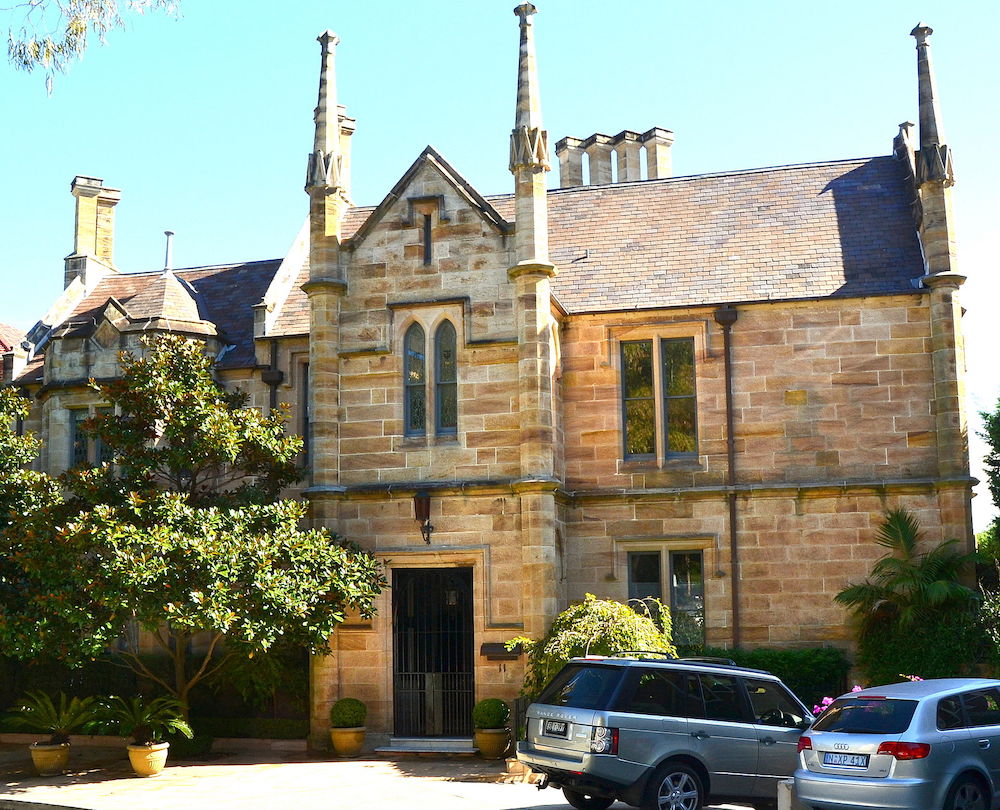 The main house’s features include:

The building stands on a property that stretches to three acres of land with its original stone gate pillars entrance facing the New South Head Road. In 1927, however, the land was subdivided into 14 blocks with the original residence assigned on Lot 6.

Additional renovations over the years extended the house to include more cloakrooms and bath,  more verandahs and drawing rooms, a boudoir, a study, and the house manager’s flat.

How It All Began

This building was part of the Point Piper Estate owned by New South Wales Corps Captain John Piper in the 1820s. Faced with financial difficulties, Capt Piper sold the property to philanthropist and politician Daniel Cooper. Following his death, Mr Cooper bestowed the property to his nephew, also named Daniel.

The younger Copper leased the property for 99 years to Edwin Thomas Beilby in 1856. Two years later, Beilby sold his leasehold to Samuel Deane Gordon, who decided to build a mansion by the waterfront.

In 1862, Mr Gordon enlisted architect William Munro to build Gladswood House, then known as Glenyarrah. Newspaper records show that Mr Munro advertised the job for stonemasons for the site with The Sydney Morning Herald.

Construction of the two-storey sandstone structure took two years. The design of the house had a slate roof with Tudor chimneys and a fireplace reminiscent of 14th century England. The building also had two wings and a verandah with large window bays.

Gladswood House was originally named the Seaford House during construction. It was later changed to Glenyarrah when Mr Gordon and his family moved in.

Mr Gordon stayed at Gladswood House until 1882. His monogram is set on the panels of the stained glass windows that brighten the lobby of the main stairs. He left the property to his daughter Jessie Maria Gordon upon his death in 1882.

But since Ms Gordon lived in England with her husband, Gladswood House was leased to Francis Bothamley Lark, and later to Thomas Hussey Kelly of the Sydney Smelting Co. The latter would eventually buy the property from Ms Gordon and leave the house to his son, Sydney-born Thomas Herbert Kelly, upon his death.

By 1913, however, the younger Kelly would sell the property to Melbourne local Mr John Spencer Brunton of the family that founded the Australian Flour Mills. It was he who changed the name of Glenyarrah to Gladswood House.

Aside from the name change, Brunton would also make drastic renovations and additions to Gladswood House by hiring architect Howard Joseland, who favoured the “Queen Anne Style” — characterized by wide porches, shadowed entrances and lobbies, and brickwork with softer finish — to Munson’s Gothic inspirations.

The words “Brunton” and Gladswood” were carved on the floors of the house’s main lobby entrance during this massive renovation.

Following the new developments, Gladswood House would then be a distinguished house in Double Bay,  popular for its social events and parties, such as the wedding of Mr Brunton’s son to Mr Joseland’s daughter.

Upon Brunton’s death, Frederick Louis Perini, a builder from Rose Bay, took ownership of the house and turned it into a residential site for multiple occupancies in 1937. Gwendoline Jean Von Tidermann and later, Ray William Stafford and Hannah Maria Stafford, took a lease on the house and managed it as a guest house or private hotel until 1988.

In 1990, Coronet Investments, headed by Ian Joye, built three two-storey apartments with three bedrooms to the west of the original house.

In 1999, New South Wales government listed Gladswood House as a heritage site, one of the very few examples of the work of Mr Munro. It’s also a popular landmark in Double Bay and one of the oldest examples of a house with Gothic and colonial influences in NSW.

Another reason that it was listed as a heritage site was that it had many occupants of significant importance to the business, political and cultural history the region and Australia. Additionally, the renovations and alterations done to the house displayed the craftsmanship of noted Australian builders.